Girl Gang Garage takes complex car restorations and elegantly achieves them. Imagine being told, “I want to take this 1961 Volvo PV544 body and mate it with a 2019 Volvo S60 hybrid chassis.” Any automotive engineer/hobbyist would look at that combination and pose many questions around how. Bogi Lateiner, Girl Gang Garage’s founder and owner, didn’t question how to do it – she worked with her talented community of over 150 women to make it happen. A vehicle mash-up like this poses many challenges. By working with the Autodesk Outsight Network, Volvo, Stratasys, PADT, and their own community, Girl Gang Garage found how to conquer and overcome those challenges.

One of the many challenges of the build included the difference in the wheelbase from the PV544 to the S60. The PV544 body was widened by 11 inches and the S60 wheelbase was shortened by 16 inches to combine the two. This size difference affects how the body is mounted to the chassis, the size of the fenders (front and rear), the suspension, and overall style of the vehicle. The packaging of the engine, mechanics of the front suspension arm, and how to integrate all the advanced electronics of the S60 all came into question, as well as the hardware and mounting of the dashboard. In general, every component from the S60 had a much larger envelope than what was available in the body of the PV544. This required many custom components that 3D printing could solve, offering a new skill set and training for the group to develop.

The S60 handle mechanism was 3D scanned, modeled in Fusion 360, and the final part made on an Origin resin printer. It integrates the modern lighting and proximity sensor from the S60.

After participating in an Autodesk Fusion 360 workshop, hosted by the Fusion 360 team and the Autodesk Outsight Network, the Girl Gang Garage team engaged in the design to make workflow to meticulously merge the two vehicles utilizing 3D print custom parts. Many parts such as the door handles, antenna cover, rear camera cover and mount, cabin air ducting, suspension adaptor, and various mounting components were modeled in Fusion 360 and 3D printed on Stratasys machines. Using Fusion 360, 3D printing, and 3D laser scanning, the team was able to iterate quickly and complete several rounds of revisions. 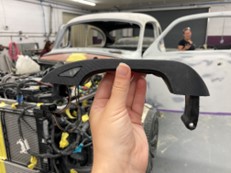 The door handle was one of the components that received the most attention in the design to make cycle. Many factors influenced the direction of the final product. The desire was to use the modern S60 door handles, lock actuators, and door handle carriers. However, the S60 door handles were much larger than would make sense on the vintage PV544. To resolve the issues, the S60 components were scanned by PADT and imported into Fusion 360 so that the part geometries could be used to scale down the size of the handle and refine the assembly. Other design iteration influences included: integrating the modern S60 mechanical and electrical components to maintain full functionality. The result was modified snap fits for sub-assembly installation, reducing the overall handle size for the PV544, improved surfacing for the PV544 body style, and finishing processes to transform the 3D printed part to a factory-made aesthetic.

The newly restored car, named Iron Maven, was unveiled at SEMA, an exclusive automotive show. Girl Gang Garage conquered the many obstacles and challenges of vehicle mash up inspiring many people around the world. This build encouraged more women to become technicians and inspired many conversations about equity in workforce development. Wonder what is next for this team? Catch Girl Gang Garage’s keynote address at the TIPE (a Women in 3D Printing event, co-produced with SME). We are looking forward to what they do next.

Alana Mongkhounsavath is a Network Development Manager at Autodesk.

Learn how to apply affordable and easy-to-install digital solutions to solve common analog problems in small to medium-sized shops.

Learn how Autodesk Research and DAISY AI Inc recently showcased the applications of AI for sustainable construction design at Greenbuild 2022.

Have we piqued your interest? Get in touch if you’d like to learn more about Autodesk Research, our projects, people, and potential collaboration opportunities